Making its debut at the 2016 North American International Auto Show, the new Acura Precision Concept model points toward an ambitious future for Acura design. It's all about "Precision-Crafted Performance," which is at the heart of the Acura brand. Jon Ikeda, Vice President and General Manager of Acura, says "There is no more clear promise for the Acura brand than Precision Crafted Performance. We're committed to infusing this core Acura promise into every facet of our products and every aspect of our relationship with the customer." Let's take a closer look at what this new concept car promises!

When an Idea Materializes

With the Acura Precision Concept model, there's a bigtime focus on high-contrast detailing, with sheer surfaces and powerful sculpting. Take a look for yourself; check out the long dash-to-axle ratio, the deeply sculpted surfaces, and the new Diamond Pentagon grille. This is the embodyment of Acura's ideals of performance and prestige.

"The Acura Precision Concept is more than simply a concept vehicle; it is a design study model that literally will shape the direction of all future Acura products around our Precision-Crafted Performance DNA," says Dave Marek, Acura's Global Creative Director. "The Acura Precision Concept is the leading edge of our renewed commitment to delivering Precision-Crafted Performance in every facet of the product experience and creating a powerful and very exciting direction for the next generation of Acura models."

As you can see, the Acura Precision Concept has an aggressive, ambitious stance. It's accentuated by sculpted side surfacing that flows all over the swelled rear wheel arches and the 22-inch wheels. The Jewel Constellation LED headlight designs are made from organically arranged fractal elements, a signature design for the Precision Concept. It's rumoured that if you stare too long at the vehicle head-on, you'll start to think it's staring right back into your soul.

"Quantum continuum," a design theme considered the soul of the Precision Concept, is in the seamless transition of the build and materials from the exterior into the interior, making for a consistent, flowing look-one that makes a stunning impression. You'll notice how the large door rocker panel flows seamlessly into the interior side sill, and then into a cantilever for the floating rear seats. A rear, center, high-mounted stoplight pierces the rear glass and pours down to form the metal airfoil shape for the rear headrests.

The high-contrast front seat surfaces and floating rear seats make you think you're seated in a high-class lounge, and you won't be able to help but go wide-eyed when you see the beautiful double-layered instrument panel and the audio speaker grilles made of hand-crafted exotic wood. Striking tones and expressive surfacing help make for what is truly a drop-dead-gorgeous interior.

Look Around, be Immersed

The race-inspired, sports steering wheel with its paddle shifters; the driver's head-up display; and the wide, thin, and curved display screen make for a truly immersive experience. And you won't believe this: Acura's new digital human-machine interface (HMI) scans every occupant and then selects personalized features and functions for them, individually. Audio and customized performance settings are among these functions, making for a truly personal connection each occupant can have with the Precision Concept. 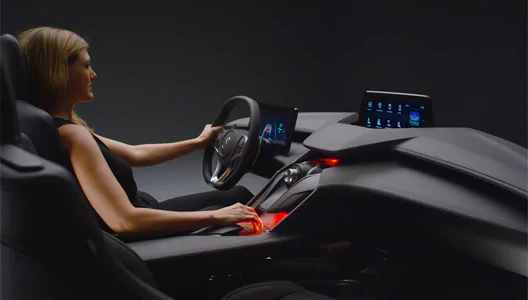 Recently revealed, the Acura Precision Cockpit is an interior-styling and technology concept that builds upon Acura's future vehicle design. It's all about connectivity and semi-automated driving technology to enhance the driving experience, and it accomplishes this with the touchpad-based interface and ergonomic design, and much more.

For example, as soon as the automated systems are engaged, the digital gague in the driver's display gives a dynamic layout that displays other cars and road objects recognized by the vehicle's advanced sensors. By using artificial intelligence to predict pedestrians' future pathways, the technology gives you that much more confidence in the car's automated driving systems. And as for these systems themselves, they're known as the AcuraWatch suite of active safety and driver-assistive technologies deployed in more than 70,000 Acura vehicles

The Acura Precision Cockpit's seats, steering wheel, and drive mode dial were inspired by the NSX, as you might be able to tell. 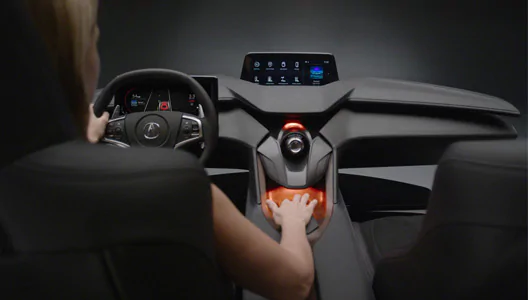